How many times have you wanted to play a fun game with a friend from Scabble?. But you can not always have the partner, that's why they invented the game which you can play alone. FreeCell is one of the variations of the classic with many interesting and more challenging for you . 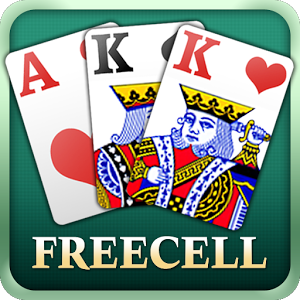 The good news for players is that very few of the FreeCell games screen can not be solved . We just challenge your intellect and your sensitivity to the compound arrays . And you'll play FreeCell with a deck of 52 standard trees .
The history of the game FreeCell is the most exciting thing. It was invented in 1978, but virtually unknown until it was released as one component on Windows 95.
One of the oldest ancestors of FreeCell is Eight Off. In the June 1968 edition of Scientific American, Martin Gardner described in his "Mathematical Games" column a game by C. L. Baker that is similar to FreeCell, except that cards on the tableau are built by suit rather than by alternate colors. Gardner wrote, "The game was taught to Baker by his father, who in turn learned it from an Englishman during the 1920s".
This variant is now called Baker's Game. FreeCell's origins may date back even further to 1945 and a Scandinavian game called Napoleon in St. Helena (not the game Napoleon at St. Helena, also known as Forty Thieves).
Paul Alfille changed Baker's Game by making cards build according to alternate colors, thus creating FreeCell. He implemented the first computerised version of it in the TUTOR programming language for the PLATO educational computer system in 1978. Alfille was able to display easily recognizable graphical images of playing cards on the 512 Ã— 512 monochrome display on the PLATO systems.
This original FreeCell environment allowed games with 4â€“10 columns and 1â€“10 cells in addition to the standard 8 Ã— 4 game. For each variant, the program stored a ranked list of the players with the longest winning streaks. There was also a tournament system that allowed people to compete to win difficult hand-picked deals. Paul Alfille described this early FreeCell environment in more detail in an interview from 2000.
Letâ€™s join and play Freecell solitaire. You can select many types of Solitaire on our World of Solitaire.
^^ Have a good time ^^
More Infomation About Solitaire