You’ve probably heard many times the story about the game Solitaire on Windows: derived from a game that is designed to help users switch to DOS GUI graphical interface, Solitaire unwittingly become one of the most popular games on the world. 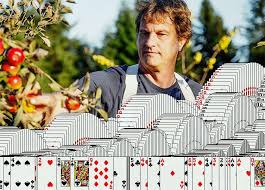 Wes Cherry today - Solitaire Author
Solitaire is the game which included free with every copy of Microsoft’s operating system (excluding a short break with Windows 8). According to journalist Josh Levin : " Although Solitaire is not much innovative and creative over the years , but it has completely changed the way we live and work . "

Solitaire has spurred the development of personal computers , demonstrates the growth of the Windows operating system and change the office culture permanently . In addition, the Solitaire has helped people overcome the boredom of working hours in the office or extended idle time on the flight .

We can say, Solitaire is the most popular and addictive game that game makers have ever created . Of course besides Solitaire , since version Windows 3.0 to Windows 10 , the game like Pinball , Minesweeper or pleasures Chess are also killing time entertainments which are extremely impressive, fascinated many generations of PC users.

The “Solitaire” included with every copy of Windows since version 3.0 of the operating system isn’t actually solitaire. There’s no such game. Instead, that’s a term given to a whole family of card games which allow a single player to cut a deck and methodically work their way through by sorting them by colour and/or suit.

The card game most people associate with Windows and solitaire is but one of many variants of the game, in this case Solitaire Klondike. It was first included with Windows in 1990, with a deck of cards designed by, of all people, Susan Kare, who is perhaps best-known for having also designed the original (and still iconic) Apple Macintosh icon family.

Solitaire itself was coded by a Microsoft employee by the name of Wes Cherry. Even then, during the game’s formative stages, Cherry knew the inherent potential (and dangers) for the game to become a workplace hit: he had originally coded a “boss key” into the game, which when pressed would instantly switch out the deck of cards with official-looking business, but Microsoft made him remove the feature before it was included with Windows 3.0.

One more thing that gamers and PC users already familiar with Windows but do not really know , it was the advent of Solitaire as well as a test , something to create a brand new experience for Windows users. At the time of both the Windows and the PC gaming are a totally new concept, Microsoft had to create something new helps users most comfortable, even if they are a casual gamer or an office worker want entertainment in their spare time.

And so Solitaire Game was born . A simple game that does not require high individual skills , instead just make players to think a little. But the mantle of bright graphics and content are familiar led Solitaire become extremely accessible in the eyes of those who use a computer for the first time, as they only need to hold the mouse to drag and drop the cards on the screen.

The reaction of Solitaire players when exposed to the game at the first time that is not surprising: They are extremely loved it.

Thankyou for reading. Wish you have a good time with many types of free online solitaire card game on world of Solitaire